As I am studying japanese I need to practice a bit specially now that the exams are over (JLPT was on December 4th), so I don't forget everything I learnt.
I tried to play some videogames as I thought it would be easier as they are aimed for teenagers or kids, but I failed miserably so I will start slowly translating some sentences I find in those videogames using Google as my main research tool.

I'm going to publish here on my blog the first sentence I've chosen and how to understand what it says (more than translating it).
Is this winning quote from Ryu taken from Street Fighter 2. 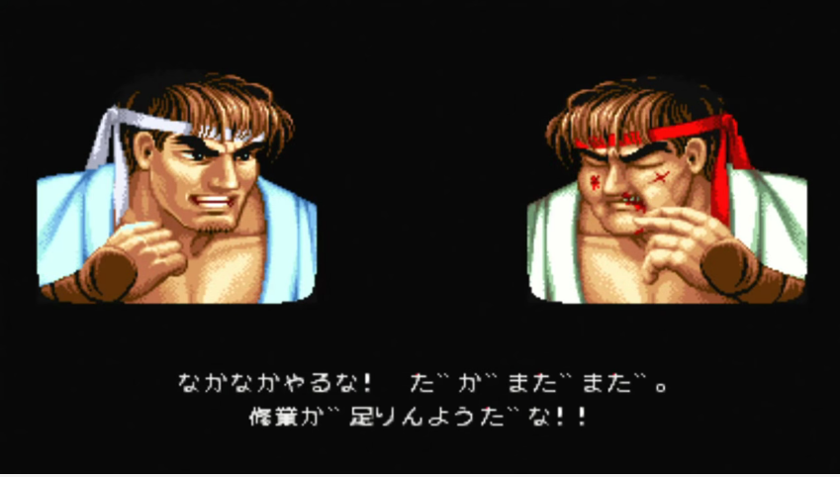 This sentence contains 3 parts, the first is the word なかなか
You can check the uses for the word.It roughly then means quite.

The next word is やる This is the plain form for the english verb to do. Check the verb conjugations.

Finally, there is the particle な!
That can be used the same as ね. This particle has a manly/agressive context and as we all know Ryu is a tough guy!

So the whole sentence means something like You are quite good.

だが can be translated as the English word however.

まだまだ Is translated as not yet or still a lot to go.

So this middle sentence would mean something as However, you still have a lot to go.

修業 is the kanji for the act of training and it is read as じゅぎょう. Followed by the particle が that marks the reciever of the verb.

足りん comes from the verb 足りる (to be enough) and means insufficient the kanji is read た. Follwed by ようだ that means something like it looks like. And again the particle な！！ that is the same than in the first sentence.

The whole text means something like "You do well. However, you have a lot to go. Your training seems insufficient". It took me like an hour to decrypt the content of this quote, so imagine how far I am from understand it the few seconds that it appears on the screen. We could say that my japanese is still very まだまだ！

Hello, in this post I will not be reinventing the wheel or anything but I would like just to mention a couple of things I configured at home in order to play video or audio files I can start downloading from anywhere later on

I wasn't planning to write this here as there are many official guides on this topic and it would be convenient to take a look at them. But for me it has been a bit tricky to get this working so, I'm going to